BE THE FIRST ONE TO DRIVE THE FERRARI 488 GTB
ON OUR RACETRACK IN LAS VEGAS
The Ferrari 488 GTB is the long-awaited evolution of the Ferrari 458.
Watch the Test Drive & Review

THE FERRARI 488 GTB IS SO MUCH FASTER!
It sounds glorious, it runs hard, and it has an
character of its own.

"Pure pleasure to drive, the new Ferrari 488 GTB is now the fastest car around our track. The successor to the already mind-blowing 458, the new berlinetta is faster and more agile, with a refined active aerodynamics package and nearly 100 horsepower more from its turbocharged V8."

Everything top to bottom was fabulous, we agree to make this an annual event.
- Mark
5

This was my second visit to Exotic Car Racing. *** was an excellent teacher and a lot of fun. My goal was to learn to navigate my lines through the turns better and, with *** help, I did. The drift ride is a must!! We'll be back (actual we've decided to make it an annual event).
- Paul
5

I have done other driving courses, but keep coming back to EXR-it doesn't get any better than this. The experience was superb-office personnel, front office staff during check-in, orientation, and especially, the driving coach(***). All were personable, and excellent!!!
- Richard
5

I have been reborn behind the wheel of a Ferrari 458 Italia!! What an amazing experience. Right from my pick up in Las Vegas to my departure from the facility I was treated well at all levels by friendly, helpful people. My driving instructor *** was excellent and provided clear instruction on all aspects of safe, fast driving with the perfect balance of correction and encouragement. I found the price to be very fair considering the price associated with the cost of the cars, maintenance, insurance, coaches, and track facility. Without question, the best value in Vegas. I would recommend this experience to any sports car enthusiast. Thanks Exotics Racing - I can't wait until I see you all again for an extended track session. ***
- Shawn
5

A very friendly tone with the staff. I was given good and sufficient information prior to the driving. The instructors made me feel really safe in the car and on the track, I enjoyed every second. Great experience, I am sure to be back the next time I'm in Vegas!
- Erik
5

This was a surprise gift for my husband for our anniversary-he had a freaking awesome drive! And my ride with *** was both exciting & freaking fast! Great time for us both! Thanks for sharing this experience!
- Willie
5

Great day! The entire experience was perfect in every way.
- Jonathan
5 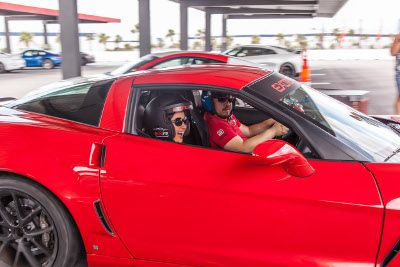 
Exotics Racing has temporarily suspended operations at its Las Vegas location for the good of its clients, employees and communities. We are taking reservations for driving experiences beginning Friday, May 1st.