This was one of, if not the coolest things I have ever done in my life, and I've done a lot of cool things, there is nothing in Vegas I would recommend doing more then visiting Exotics Racing and tearing up the track in a super car, it's the most fun I've had with my clothes on!
- Matthew
5

This was an amazing experience and I will most certainly do it again. The instruction, both pre-flight and in-car were superb and really enhanced the experience. I would recommend this to anyone.
- Charles
5

Great well oiled and seamless organization. All in all very satisfied.
- Antoine
5

This was my 4th car to drive and second time at the track,I drove the Corvette GT, Ferrari F430F1, Lamborghini Gallardo first time. This time I drove the Nissan GT-R. The GT-R was the best by far. It was easy to drive and I had a Great instructor. Don Corson
- Gerald
5 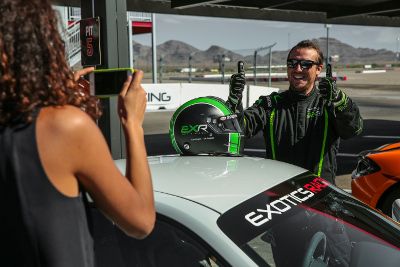 We had such a wonderful time. Exotics racings is probably the most exciting activity one can do in Vegas! We can't wait to return. Houston, TX.
- Nancy
5

This was a tremendous experience!!!!! Extremely gratifying. I would suggest more time to familiarize the driver with the car.
- Atul
4

This is a truly worthwhile experience, the track is complex, the cars are clean, fast and fantastic. If you do nothing else at all have a go in the ride-along, the most fun I had in Las Vegas, end of story.
- Matthew
5

Fantastic experience, the thrill of a lifetime!
- Michael
5

This was one of the most enjoyable and fun times I have had. If I lived closer to las Vegas I would be there all the time. The cars are fun and as fast as you can drive them. There are 2 things I would do different 1st thing is I would order the Video, I regret this every day that I did not order it so I could relive the laps in every Car I drove. the 2nd thing is to get more laps, don't cheep out if you can afford just 1 more lap then take it because the more laps you take the faster you get. I did this for my 50th Birthday and it was the best time ever Ryan Esau Saskatoon, SK. Canada
- Ryan
5
1424145715981635157917631669181218651957