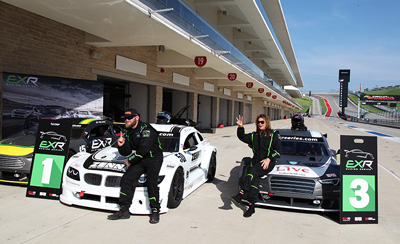 Burt and Caitlyn Jenner on podium at COTA

The EXR Racing Series began a new era in arrive and drive racing at Circuit of The Americas in Austin, Texas on April 29 through May 1, 2016. Using our LV02, tube frame race cars, 10 drivers participated in two separate, 10-lap sprint races. The field included celebrity driver Caitlyn Jenner and son Burt Jenner. Both came with a strong background in racing. Most recently Burt Jenner has driven in the Stadium Super Truck series and Caitlyn Jenner raced in the IMSA GT Championship series during 80s and 90s. Suffice it to say, we expected a lot from them and they both delivered.

Race one on Saturday saw Burt Jenner win after starting in first position, falling back, and fighting back to first. Making the win even more special was the fact the Caitlyn Jenner also made the podium, taking third and joining Burt in the winners circle. Race two on Sunday was similar; however, Romain Thievin won after battling Burt then entire race. Burt Jenner took second and Caitlyn fought her way to third once again. In between on races, both drivers had access to premium trackside hospitality complete with DJ, not bad.

Before racing with us at COTA in the EXR Racing Series, Caitlyn Jenner visited Exotics Racing in Las Vegas to drive our new Porsche GT3. She was interested in test driving it while she wanted to take delivery of her Porsche GT3 RS (we are a bit jealous). Caitlyn tore up the track in our GT3, our first indication that she was a serious track day driver.

(Burt Jenner racing his EXR LV02 at Circuit of The Americas)